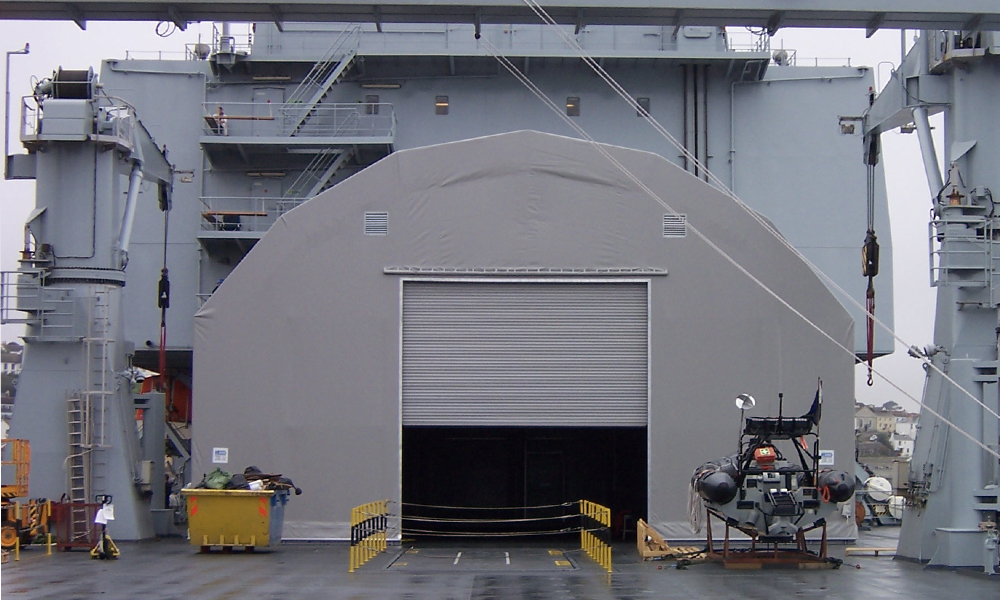 For the past 13 years, they have demonstrated the extent of usability, engineering, and service Rubb can offer. No other solution could be dismantled, refurbished, modified, and relocated so many times and still operate to the peak performance Rubb’s customers are accustomed to. With over a decade in the harshest maritime conditions across the world, these rugged Rubb buildings have a fascinating story to tell.

It began in 2008 with Rubb being commissioned by shipbuilding company A&P Falmouth to supply and install an onboard storage building for the RFA Cardigan Bay. Bay-class ships are 176.6m long, and have a full load of 16,160 tonnes. The 15m span x 18m long steel-framed and fabric-covered NV structure was used to protect valuable equipment onboard the vessel.

The structure, featuring a sidewall height of 5m, included:

This structure remained on the ship for a further 8 years until it was dismantled and reinstalled for refurbishment and modification in 2016. That is the only work on the structure, save for a new roller shutter door being installed in 2015. This goes a long way to attest for the durability of Rubb’s buildings, especially with the structure being in harsh maritime conditions for nearly a decade before refurbishment.

Cardigan Bay has taken part in several operations with the Rubb structure on its deck. From Yemen to Somaliland, the vessel has seen plenty of service over the years. Now it is stationed permanently in the Persian Gulf and Indian Ocean as part of the longstanding Operation Kipion, promoting peace and stability in the region.

Largs Bay was built at the famous Swan Hunter shipyard at Wallsend in 2002, which has special significance to Rubb as several giant Rubb hangars dominated the Tyneside skyline there from the early 1980s until 2008. The Royal Fleet Auxiliary ship launched in 2003 and served with the UK Ministry of Defence from 2006. 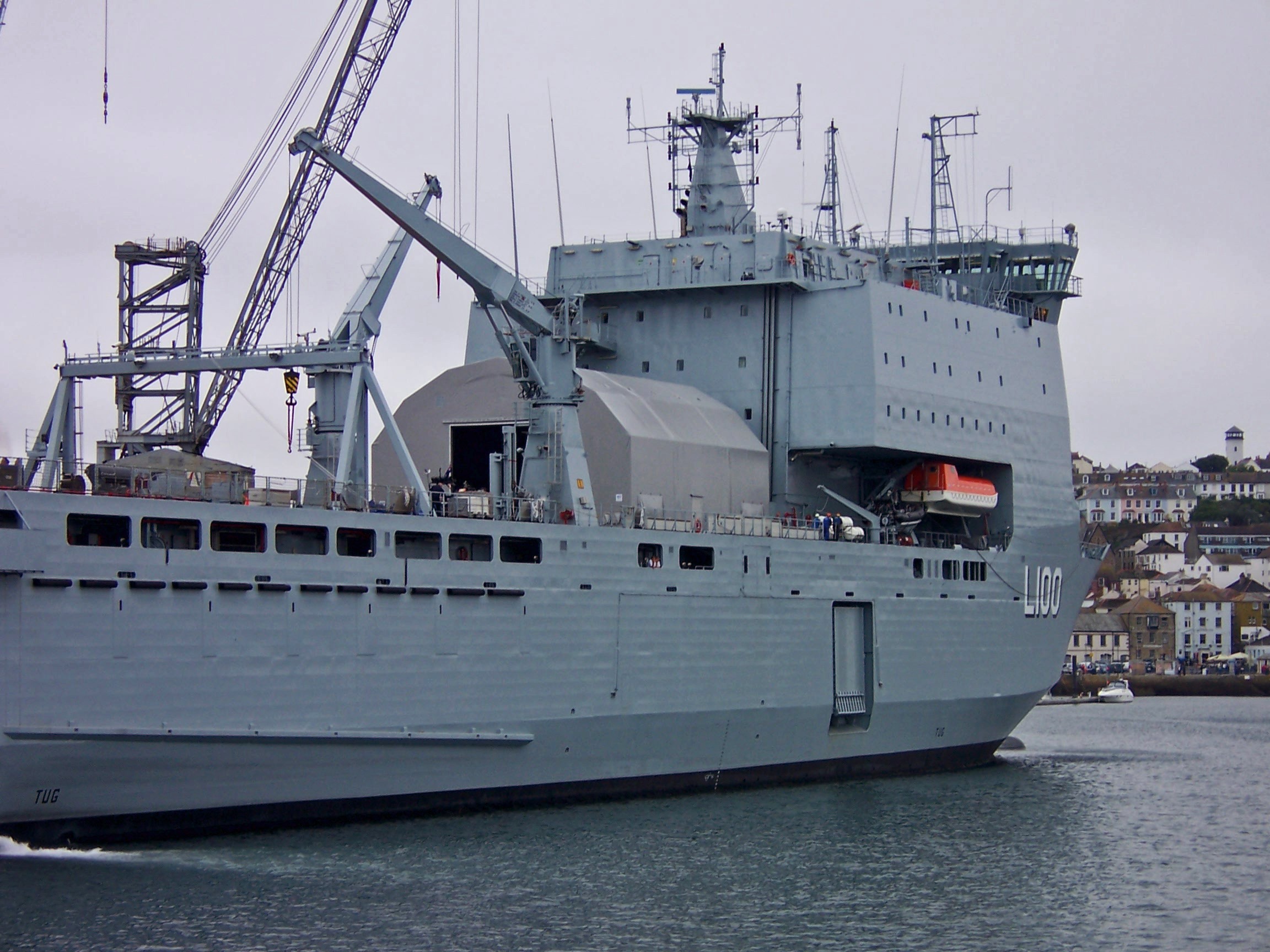 In 2010, Largs Bay’s NV was dismantled and placed into storage. Then, the following year, the NV was brought out of storage and refurbished by Rubb to be reinstalled onto the vessel. The structure went on to serve for three more years on the ship’s deck until 2014, when the vessel was purchased by the Royal Australian Navy and renamed to HMAS Choules.

Following adaptations to ensure she could operate under tropical conditions, the decision was made to dismantle the Rubb NV and place it into storage for future use.

The Rubb team made the trip to Australia, tasked with supervising the removal. Site Supervisors Allan McKenna, David Cromarty, and Trevor Sarginson completed the project and found the building had been well maintained with no damage to any of the structural elements, fittings or fixtures. The steel foundation ring beam was also been dismantled with no adverse effects to the ship’s deck. The building was packed and secured into the supplied 40ft Open Top ISO Container ready for transport and storage until future deployment.

Allan McKenna, who was also part of the team which originally constructed the hangar on Largs Bay, said: “It was easy to dismantle, in really good condition and packed back into one container. This was removed from HMAS Choules and stored for later use. The project went very smoothly and took nine working days to complete.” 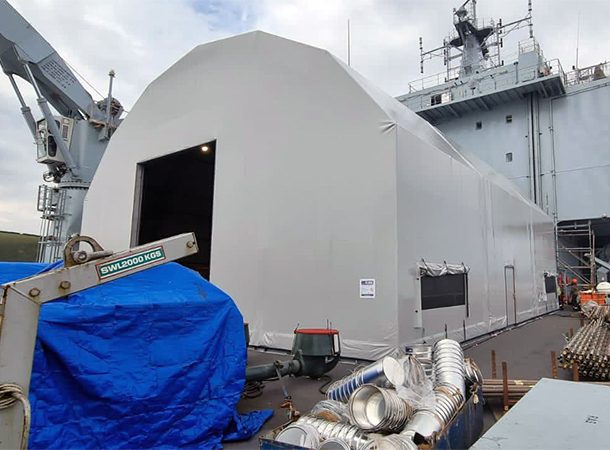 The dismantled NV did not have to wait long before being redeployed, however. Later that year, A&P Falmouth ordered the construction of the former RFA Largs Bay’s structure on RFA Mounts Bay—another Bay-class vessel in the Royal Fleet Auxiliary, and the third to be equipped with a Rubb building.

2020 saw this structure dismantled, and subsequently refurbished and reinstalled in 2021.

Similarly to the other structures, it has largely toured the Mediterranean and Caribbean in both anti-piracy and relief efforts. 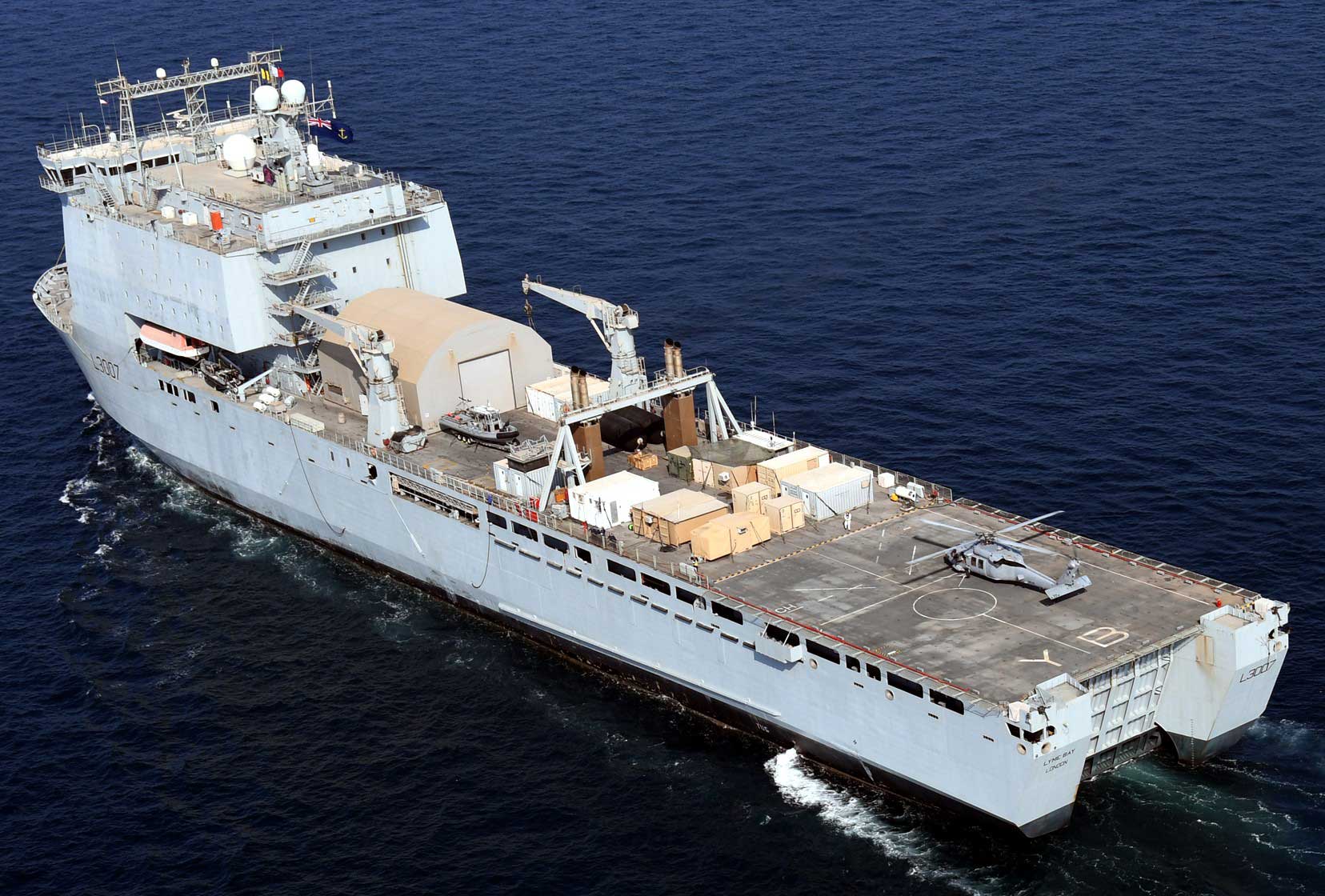 In 2015, a brand-new NV was commissioned for Lyme Bay—the fourth and final ship—following the same specifications of the previous buildings: 15m span x 18m long. This structure saw several years of service, beginning with counter-piracy operations off Somalia; hurricane watch in the Caribbean; disaster relief in Dominica following Tropical Storm Eric; and the search and recovery of EgyptAir Flight 804, which crashed over the Mediterranean Sea.

In 2018, Lyme Bay returned to Falmouth for an extensive refit, and the opportunity was taken to dismantle, refurbish, modify, and reinstall the Rubb NV.

Currently the Rubb structure sits on Lyme Bay’s deck as it is stationed in Portland Harbour, off the south coast of England enjoying some well-deserved rest.

Ian Hindmoor, Rubb UK Managing Director, commented on the 13 years of work Rubb has accomplished for A&P Falmouth and the Royal Fleet Auxiliary: “These longstanding projects demonstrate the relocatability of Rubb structures. They are easy to build, dismantle, store and relocate—which suits many of our clients perfectly, who must adapt quickly to ever-changing logistical requirements at a moment’s notice.” 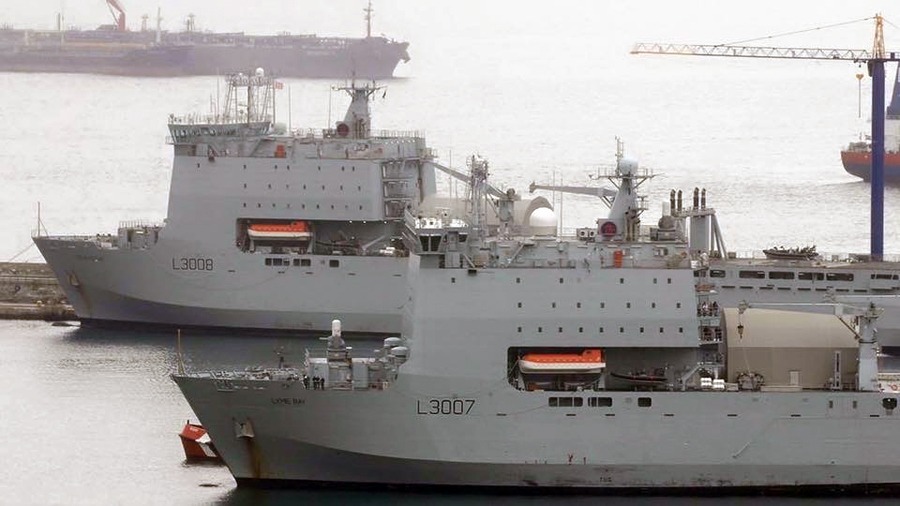 Below is a timeline of key events for these projects:

To learn more about how Rubb Buildings can support your project with relocatable, custom-designed solutions contact the team today.